After seven days of safari you should think that you have seen almost everything, because you have already seen during past days bunch of lions, elephants, gnus, zebras, hyenas, antelopes, warthogs, hippos, leopards, and much more animal species that I actually don’t remember their names.
So, you may think that the last safari day before moving to a relaxing and luxury week at sea will be quite boring, and you will pass it watching the same beautiful things you have seen during past seven days and nothing will excite because you’ve seen everything at all… But you are absolutely wrong!
In fact during our last day spent in Serengeti National Park we had the opportunity to admire exactly what was missing in our “must see during safari” list: cheetahs and great migration!
First of all cheetahs: we met them less than half an hour we left Sayari Camp for our daily game drive. It was a great surprise because we didn’t expect them on our last day: we already met them in Serengeti but they were hidden in high grass, so we barely could see them only with our binoculars.
But then we finally had the chance to admire them playing together: they were a couple – a mother and her grown male cub. Our guide said that probably they were returning from their night hunting; the mother was quite tired and she wanted to rest but the cub was so sociable and couldn’t stay quite so he was trying to play with her. They were so funny and beautiful: the cub running after his mom, the adult female pushing him away – but playing with him at the same time. They reminded me two big cats and our guide told us that cheethas are very similar to cat indeed: they aren’t aggressive at all, they are very curious and friendly and they often get close to tourist’s jeeps and try to get into them, but not for attacking people, only for the pleasure to looking around and socialize.
We admired them for half an hour and I wished I could jump off the jeep and play with them.
Of course I couldn’t do that but it was a great experience anyway :P 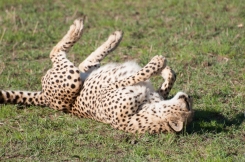 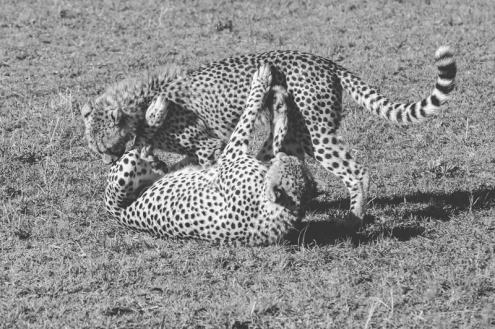 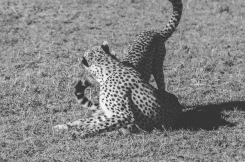 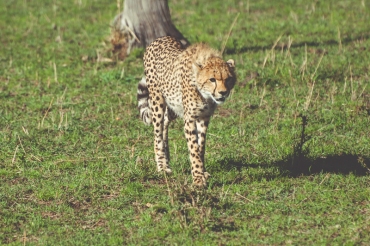