One of the most interesting activities we’re used to doing when we’re traveling abroad is to experiment how local people spend their spare time and how they usually chill out. In few days in Vancouver we learned that Canadian people love to stay outside when the sun in shining, and to enjoy the summer walking, sunbathing, riding a bike.
Stanley Park – which has been named “top park in the entire world” by TripAdvisor in 2014 – is one of their favorite places to spend time doing nothing but enjoy the good weather with their friends and relatives.
They immediately reminded to us the relaxing way of living of people from Amsterdam.
Gezelligheid is a philosophy of life in Canada as much in Holland.
So, we did exactly the same on our fourth day in Vancouver.
And we walked 10km from 9am until noon. 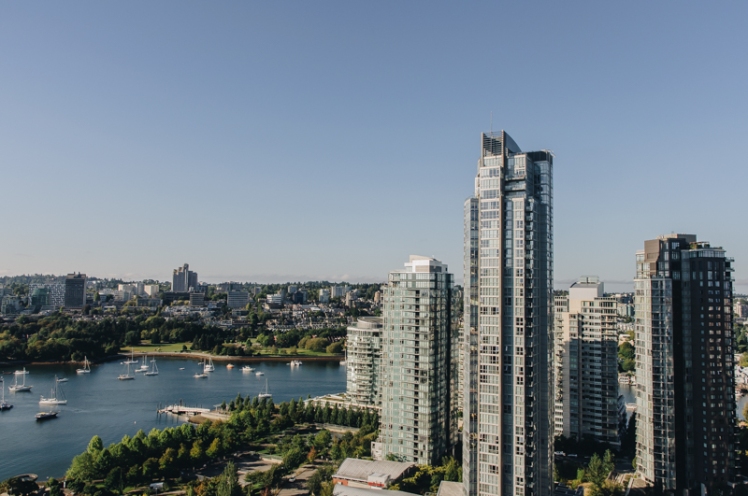 English Bay Beach is a very common place in Vancouver to enjoy summer and the sea. We’ve been walking along the beach very early and it was more crowded by seagulls than people.

Such an amazing light! 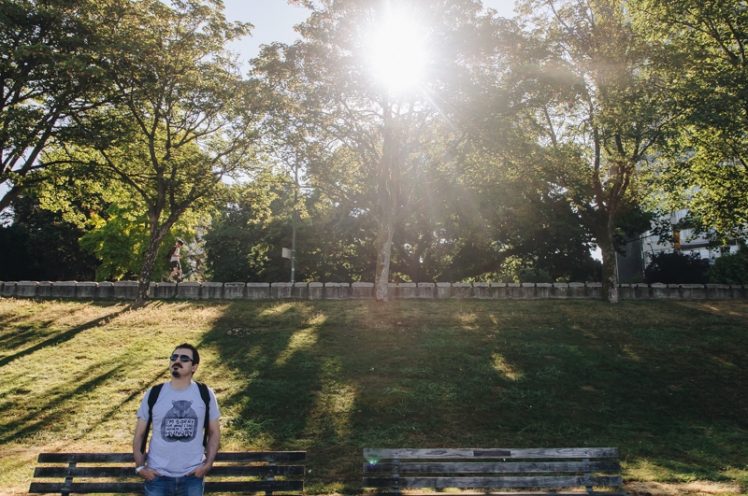 Canadians of Vancouver are really creatives. I love these good vibes given by the common people!

One of the many pleasant activity to do in Stanley Park is the long walk on the surrounding Seawall.
The Seawall is a stone wall that was constructed around the perimeter of Stanley Park to prevent the erosion of the park’s foreshore.
You can see people running and moving around since 9am – even elderly ones.
People with skateboard or roller skates are really common too. 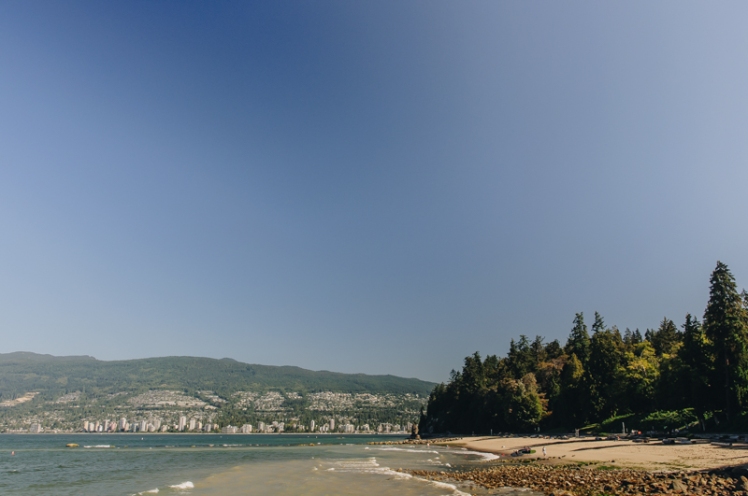 Canadian people are really into getting fit. Even if they’re probably 80 years old.

You know, Vancouver bay beaches are not like the Caribbeans ones but you can enjoy summer as well.
This is the true Canadian way! 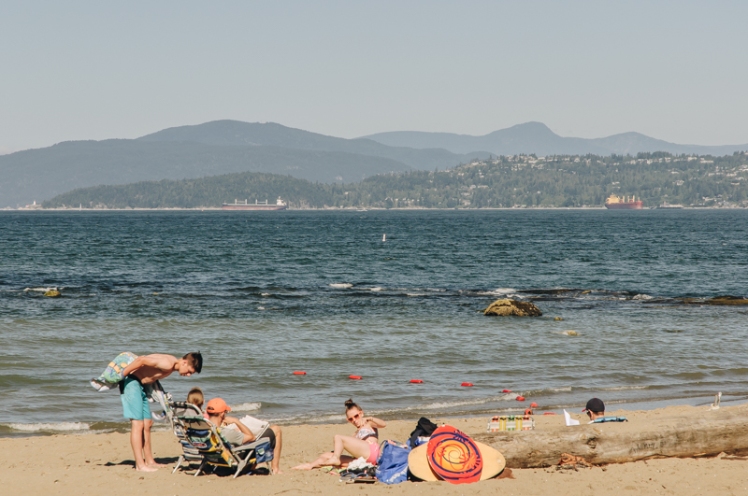 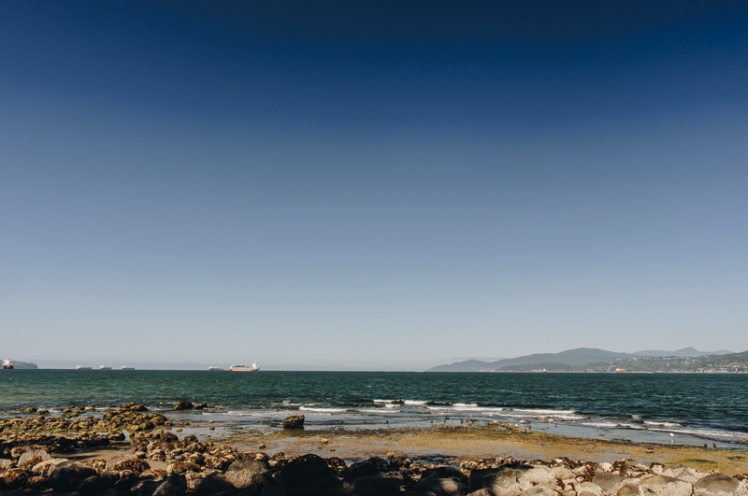 Almost the half of the walk is done when you finally see the Lions Gate Bridge. 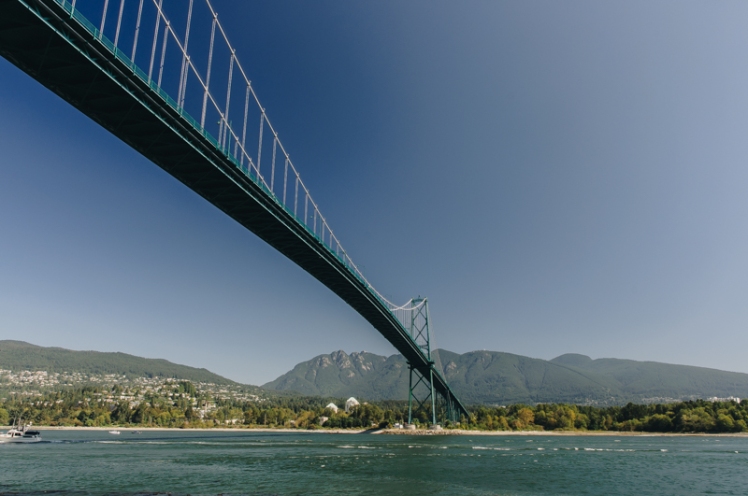 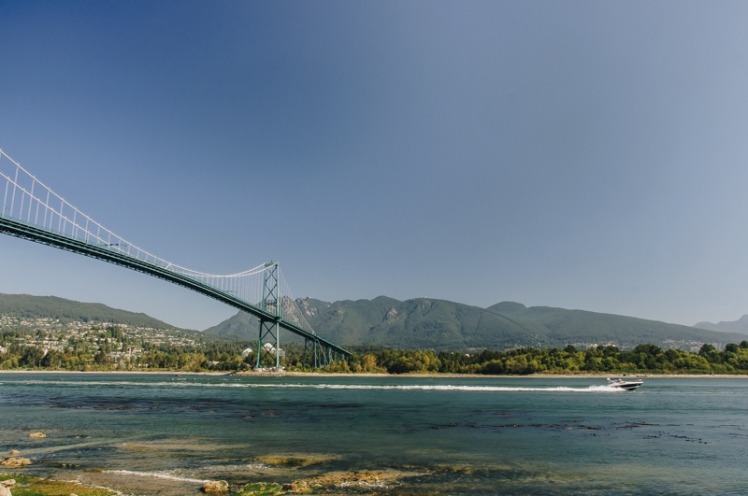 Here we arrived on the other side of Stanley Park… The sun was shining so bright that the temperature started to getting high; but fortunately there was a pleasant breeze so it wasn’t so hot.
This is, in my humble opinion, the perfect weather for summer! 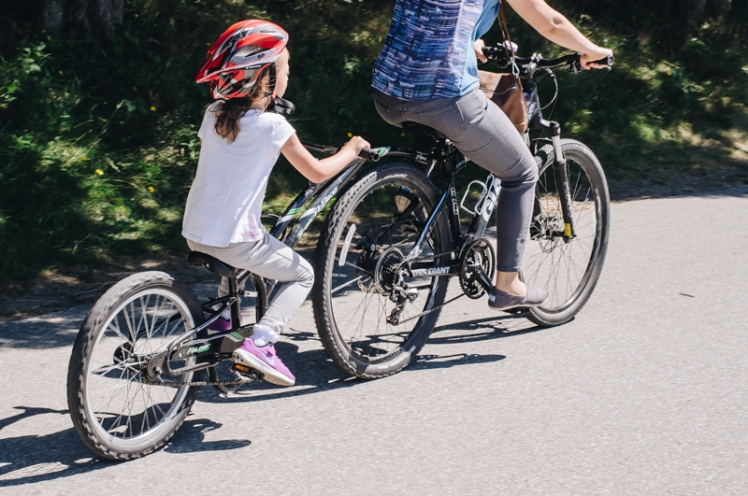 A brief show offered by the local flying circus.

Fall was already coming – and I was really amazed by these colors.

There is also a funny playground with water games in Stanley Park. It was full of kids and families and everything was so joyful: everybody was enjoying the summer and the sunshine in whatever way they want. 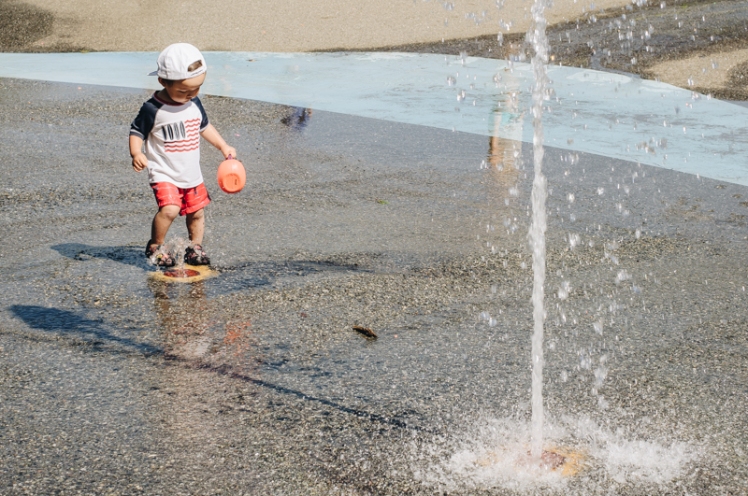 One of my favorite views of Stanley Park: trees with color changing leaves and Lions Gate Bridge.

Unfortunately you’re not allowed to swim in the bay at this point, otherwise I’d loved to jump into the water. 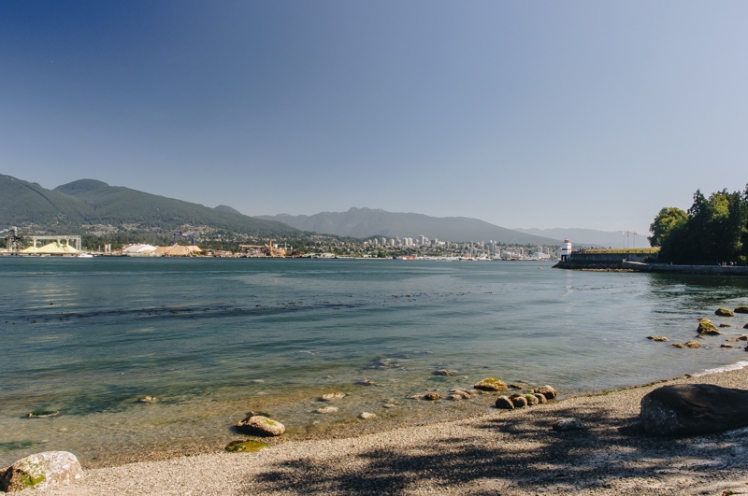 Water planes are landing and departing from the Waterfront, over and over again.

Stunning view of the Vancouver’s skyline from Stanley Park. 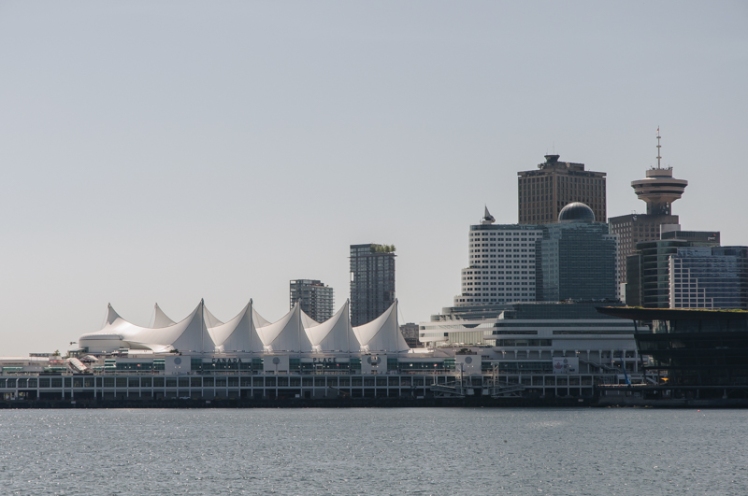 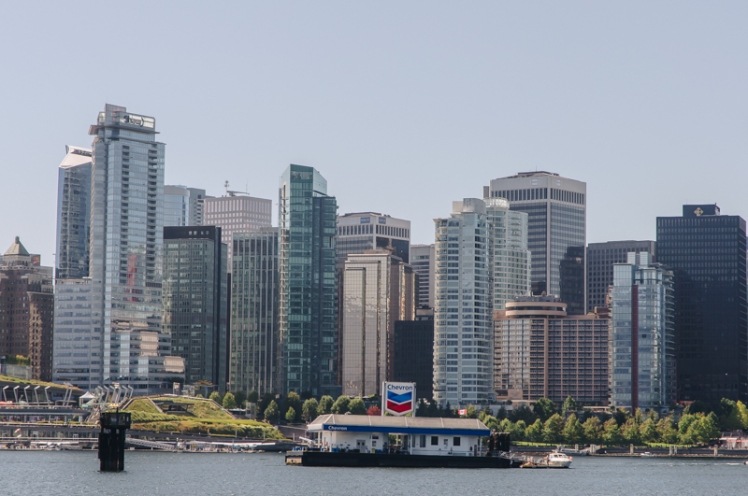 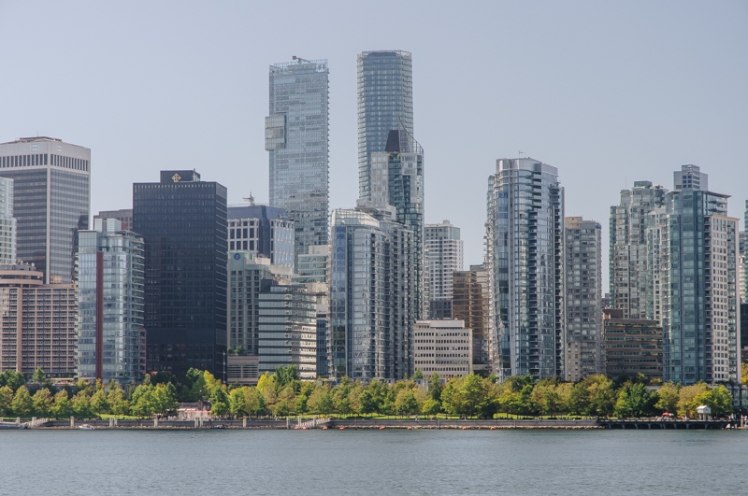 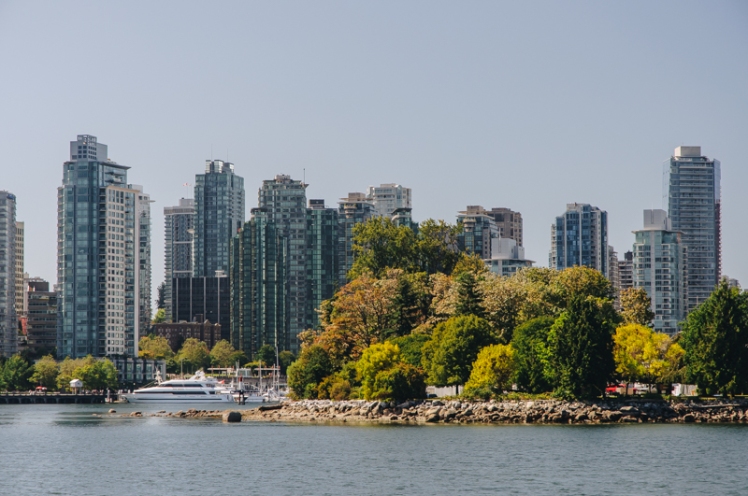 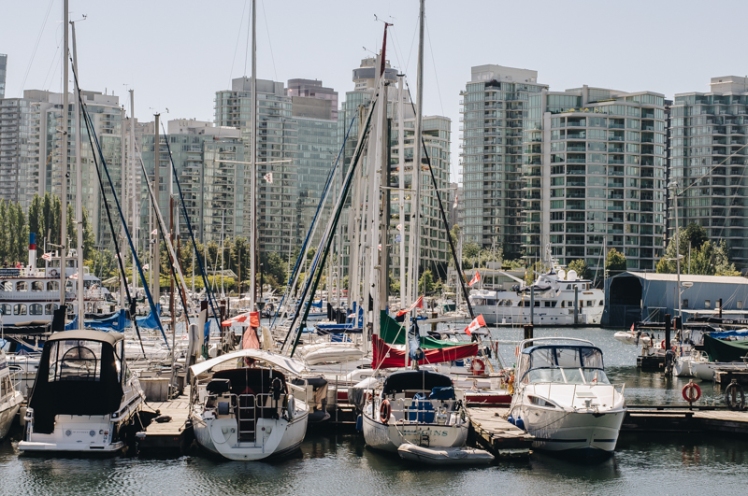 Luca prefers shadows instead of sun light. And I think that he was dreaming about lunch at Meat and Bread at this point. 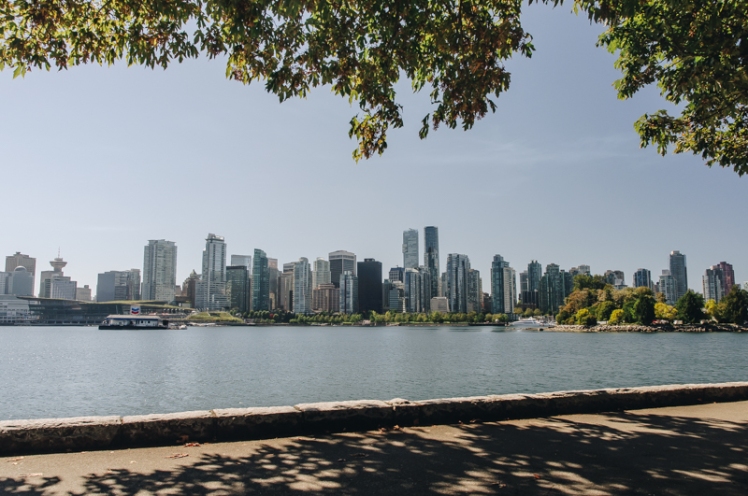 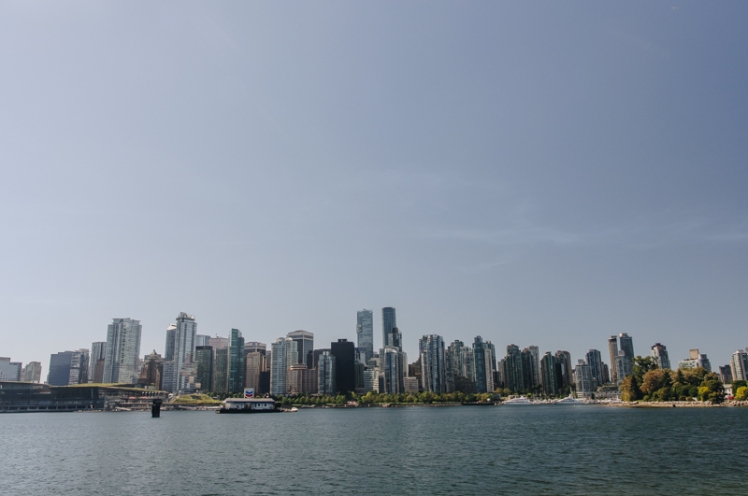 Even after 10km walk, and a very big hunger, you can easily imagine why this particular morning is currently one of the most beautiful memories we have brought home from this travel.